So a little update on my garden, it has gone really well all summer even if I did neglect just a teeny bit. Put it this way; since it practically rained every day this summer, I rarely had to go up to the garden to water it which kind of lead me to forget about it some of the time! I’m not proud and it’s not cool.  This neglect let to astonishment when I did visit the garden at the size and quantity of my vegetables! It seems that since I had put in a lot of work at the start, the vegetables kind of looked after themselves; I have enjoyed beetroot, fennel, radish and the best of all…any amount of courgette! Anyone who is familiar with growing vegetable will know the rate that these things grow at, in what seems like a few days they turn into monsters.  At the moment I am inundated with huge courgettes that I cannot cook at a quick enough!  I have made soup, tried to stuff them, pawned them off to friends and family…and they just keep sprouting up! I harvested a particularly big whopper on Thursday, what to do what to do? 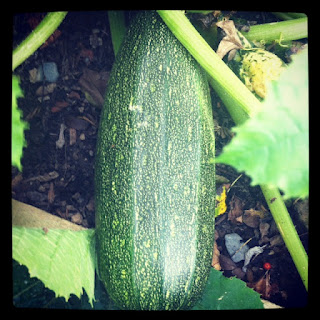 Friday’s dinner came around and I had no one to cook for but myself, there was a piece of salmon in the fridge and I was waiting for inspiration to hit me. Then I remembered my friend Orla telling me what she did with the courgette I gave her, she griddled it and had it with a salad, aha! Griddle I’ll try that.  I brushed slices of the courgette with olive oil and seasoned with salt and pepper, placed them on a hot griddle pan and cooked for about 3-4 mins on each side, now my courgette was particularly big, if you have a regular courgette I’d recommend cutting it vertically and not cooking for so long.  While I had the pan on I also griddled some slices of pepper.  My grandmother is a much better gardener than me and I also had some of her yellow and red cherry tomatoes which I threw on the pan for a minute. I put all the veg in a bowl with some chunks of feta cheese, sliced basil, lemon juice and extra virgin olive oil that I had brought home from Spain, the really good stuff, mixed and served the salmon on top.  The result was delicious and has been replicated twice..Only problem is I still have half the bloody thing left! Suggestions anyone? 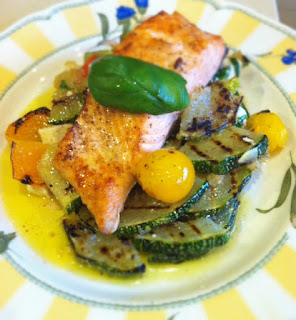 Season the salmon and grill until cooked.
Brush the courgette and pepper with olive oil and season with salt and pepper. Place on a hot grill and cook until tender
Add the tomatoes to the grill and cook for 1 minute
Place all the vegetables in a bowl with 2 tbsp. extra virgin olive oil, the juice of ½ a lemon, sliced basil leaves and some more salt and pepper, mix gently and place on plate, serve salmon on top. 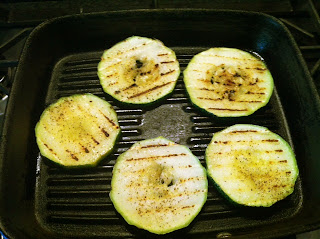 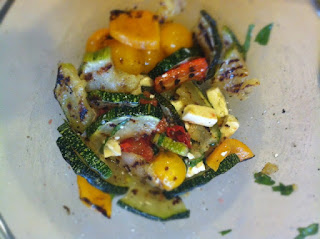