Pizza on the Barbecue

So I think it’s pretty clear to most that I love to barbecue, mostly for the pure handiness of it; no pots to wash, quick cooking time but mostly because I get a kick from cooking outside.  Maybe a throwback to my caveman ancestors.  But really how natural does it feel outside cooking something over a hot grill, granted this is Ireland so it will probably be raining but I don’t care!  The other day I came home to find my Dad outside during a torrential downpour with a brolly in his hand barbecuing steaks, now that’s devotion! 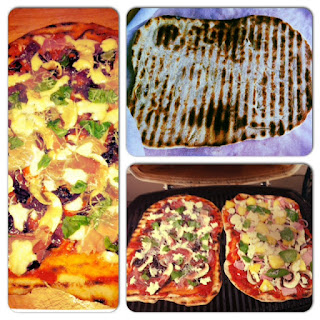 Anything that I can possibly try to cook on the grill I will, on Sunday I cooked an entire (well ok apart from the eggs but it is possible) fried breakfast on the bbq including mushrooms and tomatoes, it was so easy and the rashers just look and taste so much better with the tell-tale charred lines of the barbecue.  With this in mind, I was flicking through a great cookbook I have called ‘Grill Master; The ultimate arsenal of back to basics recipes for the grill’ by Fred Thompson it’s a great book that covers every aspect of barbecue cooking…..INCLUDING pizza on the barbecue! Pizza I hear you, say? On the bbq? Really? YES! And it’s really easy.  Also because the crust is cooked on both sides it makes for a crispier base.  Try this and you will make it again and again.  And for those of you who think that making your own pizza dough is too much like hard work or too difficult, it’s really not and the little work is worth it, I promise you will never want a frozen or takeaway pizza again, there is just no comparison.

For me when it comes to pizza toppings, I adopt the motto ‘less is more’, believe me this is one of the rare instances in life when I adopt this term, it’s usually more is more and then a little more for good measure!  But with pizza toppings it works, the Italians our forefathers of pizza practice this idea and if its good enough for the Italians it’s good enough for me... you don’t want your pizza loaded down with toppings to the point of where it gets soggy as the mountain of stuff on top wont be cooked by the time the base is done.   Of course the boyfriend wouldn’t listen to me and LOADED his pizza with everything he could find in the fridge but hey ya can’t win em all.

The trick to the bbq pizza is that the base is cooked on one side, then you flip it, put the toppings on the cooked side and put the lid back down, while the base is cooking so are the toppings, the whole process takes literally 5-6 minutes.  I’m giving you Fred Thompson’s recipe for the dough with some additions from myself and my own pizza sauce recipe.  The toppings are up to you, on this pizza I used caramelized red onion, Parma ham, mushroom and mozzarella but feel free to experiment thats the fun of it! 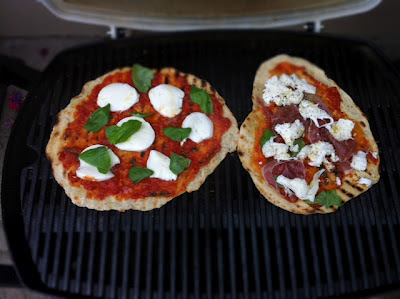 To make the pizza dough, a bowl, whisk together the water, yeast and sugar.  Let stand until foamy, about 5 minutes.  Add the flour, oil, salt, pepper and thyme.  Stir until the dough pulls away from the sides of the bowl.  Pull the dough out onto a floured work surface and knead a few times then form into a ball.  Oil a second bowl, put the ball in the bowl and turn it to coat with oil.  Cover the bowl with cling film and place in a warm area for 1 hour or until the dough has doubled in size.

To make the pizza sauce, sauté the garlic in the olive oil on a medium heat for 1-2 minutes, add the tomatoes, oregano, salt and pepper and sugar, allow to simmer for 15 minutes until it has reduced slightly.  Add the basil and take off the heat and allow to cool.

Light or turn on the barbecue to a high heat and allow to come up to temperature.  Oil the grill grate.

Dump the dough onto a floured work surface, then either divide in half or in quarters depending on the side of pizza you are making.  Roll out the dough with a floured rolling pin to the size you want your pizza to be, for the large ones, about 10-12 inches.

Slide the dough onto a sheet of baking paper dusted with semolina (it keeps it from sticking) and carefully slide the dough from the sheet onto the grill.  Cook until underside is well marked, about 2 minutes.