Chocolate Cake with Strawberries and Cream 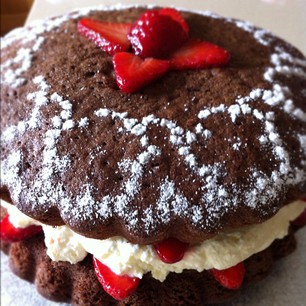 Recently I was, how shall I put it..tricked into making a chocolate cake for my friend’s 6 year old son.  I say tricked because I don’t know how he actually did it but as the conversation was over it was clear that I was making him a cake.  I think he did the aul reverse phycology trick ‘I like some of your food Emma but not all of it’, ‘I’ve never had a cake you made me’, clever chap it worked a charm.  I took the challenge(bait) if not to prove to him that I could! He was very specific in the cake he wanted; chocolate sponge with cream and strawberries – he is a man of discerning taste.  Now I in no way claim to be an expert cake maker like say my brother’s girlfriend Mary.  My cakes are simple to say the least and amateur in the decoration.

The last cake I made was a birthday cake for the boyfriend; while it was cooling I walked into the kitchen only to find our bold Weimararner Goose tucking into it!  I screamed, he recoiled and I surveyed the damage.  Now when I tell you the next part of the story, try not to judge, I have told some friends and they reacted with disgust!  But I knew the boyfriend would’nt care and I wasn’t wasting the cake.  I simply cut off the bit Goose had enjoyed, remodelled it and frosted it, I presented it to the boyfriend and he went ‘Awh lovely a half moon and stars!  I had to confess but he found it hysterical and devoured the cake.

Thankfully I didn’t have that problem with the chocolate and strawberry, it turned out very well, moist and light I didn’t want to use a recipe that was too heavy so I went for a recipe found in one of my mother’s cookbooks, it’s so old it doesn’t have a cover on it but from the back page I have deduced that it is a ‘Be-Ro’ cookbook.  I’m presuming Be-Ro supplies baking products but it’s not available anymore.  A line from the first page, “For many years, housewives have relied on Be-Ro flour to give them consistently good baking results” AHEM!! Obviously that was from back in the good old days of the patriarchy telling us that only housewives bake – God I could write a whole other blog post… but I won’t.

So the recipe, yes I tweaked it here and there, added some grated dark chocolate and the filling.  For the strawberries I sprinkled them with caster sugar and let them sit for a while to bring out the sweetness.  We sat down to the cake after a day in the garden planting potatoes and it was unanimously agreed that the cake was yummy, hurrah my reputation has been restored with my harshest critic!

Chocolate Cake with Strawberries and Cream

Add margarine, eggs and grated chocolate and mix with an electric mixer

Grease and flour 2 cake tins and divide mixture between them

Allow to cool, place a layer of strawberries on one of the cakes, add the whipped cream then top with strawberries and add the top of the cake. Sprinkle with icing sugar if you want. 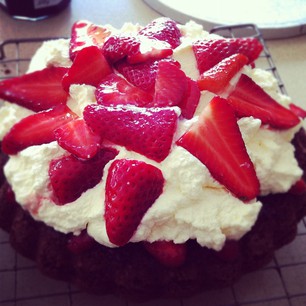 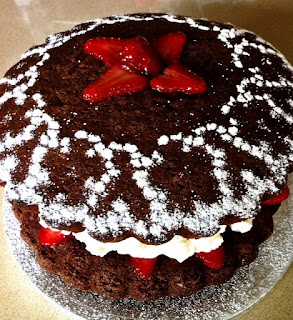