I haven’t blogged in a while, I’m not going to come up with excuses I’m simply going to say that the last three weeks I have been lacking inspiration for this blog.  Don’t get me wrong I have had many wonderful meals, God forbid I actually deprive myself and have cooked a number of taste explosions just none of them excited me enough to blog about.  Any other food bloggers read this? Do you get the same thing? Now every meal you have/dish you make people ask you “are you gonna blog about this?” Then you feel pressure to take pictures of every meal in CASE you blog about it and then your phone’s memory is full with said pictures but you’re afraid to delete them IN CASE you blog about them!, Oh the anxiety!!

So I’m just going to talk about my garden; I have recently become the proud owner of 4 and a half raised beds, a fence and a gate, I love it.  I have been talking about this for ages and wanted to do it and it has finally happened.  It started slowly with pots of herbs last year, then I got a mushroom growing kit for my birthday (They have just sprouted – the excitement!), then it was garlic bulbs in pots and now it has manifested into a full blown vegetable garden.  I am a little worried that I am already a garden snob – as I don’t simply want to grow root or ‘boring’ vegetables like carrots, parsnips and spuds, oh no I want the exotic pak choi for my stir fries, I want rocket and radish and fennel and Chinese cabbage, am I being too ambitious? Am I a garden elitist? For the record, nothing has actually sprouted in the beds yet; despite the fact that I got the very best food-waste compost from a farmer friend but I am assured that I takes more than 2 weeks to see life, not only am I an elitist garden I am also an impatient one!

But its that little thing isn’t it? Life.  My garlic was first to sprout and the thrill I got from watching something that I had planted begin to bloom was profound.  I think its because its Spring too but I am finding pleasure in the small things and trying not to stress the big ones; the budding cherry blossom, a random chicken walking across the yard, life’s little simplicities.  Because, that’s what its all about isn’t it? Life and regeneration. We get caught up with the stresses of life but if you take a step back and just be present with nature all that silly stuff seems to slide away.  Ok enough with the philosophy suffice to say I just love my garden!

But also one last word about gardening; I think I had a romantic notion of a bit of pruning and clipping and I would have a beautiful, bountiful garden.  Not the case.  It is hard work, hard physical work first off having to manually shovel the top soil and compost into the beds, then trying to work out depths and measurements’ and the correct times for planting. No I have realised with a shock that it is tough work, tough but rewarding, a labour of love- that little sprouting bud makes it all worth it… now as its the season, go forth and garden!

After a very stressful morning which I won’t get into…. Ok then you’ve persuaded me; my car (new car by the way, well not new but new to me, 02) wouldn’t start; we jumped it, that lasted for a few miles then it just died.  An amateur diagnosis was given; the alternator was broken, it was not going anywhere and would have to be towed home.  I don’t know if any of you have ever been towed before, I hadn’t and quite frankly it’s a bit terrifying!  You’ve being pulled by a vehicle in front, you have to steer the car like you are driving but your brakes seize and you’ve no control of the accelerator!  It’s like using cruise control but you have no way of taking it off.  The journey back home was a stress inducing nightmare and I’m NOT being dramatic!!  The tow rope broke no less than 5 times! Every time it snapped the whole experience became more traumatic, and the hazard lights wouldn’t even work on my car so we had to hang a high-viz vest out the back of the car, nice! When we finally got to my town I dipped down in my seat slightly ashamed.

When we finally got home it was after 11, the whole debacle had started at 9 and we were starving!  I felt lucky to be alive and waited to celebrate my living status with a decent breakfast.  I looked in the fridge and saw the tritzo aka chorizo but we call it tritzo as a little joke. Everyone has problems pronouncing it, whether they go with the Spanish the silent ch or else they over annunciate the izo, it’s just all a bit confusing.  So our joke is to pretend we are totally ignorant and pronounce it like tritzo it also save the embarrassment of pronouncing it wrong! I knew I wanted eggs so I decided on a kind of Spanish/Mexican version with coriander and chilli.  This experiment resulted in a success that I had to share as it was so tasty and a bit of a change from the usual scrambled eggs.  It also was satisfying and uplifting after my traumatic morning!

Method
Cube the chorizo making sure the pieces are quite small; dice the chilli, leaving in the seeds if you prefer the heat.
Heat a non-stick pan and add the chorizo, there is no need to add any fat.  Cook for around 5 minutes then drain the chorizo with kitchen paper, you will be shocked at the amount of fat that is rendered out.
Clean this pan then add a slash of olive oil to the pan and sauté the chilli for a few minutes, while you are doing this beat the eggs with a little milk and salt and pepper.
Add the butter to the pan, lower the heat and add the eggs, when the eggs begin to firm gently stir them until you reach the consistency of soft scrambled eggs, take off the heat, add the chorizo and chopped coriander.
Serve with a tortilla wrap on the side and some salsa. 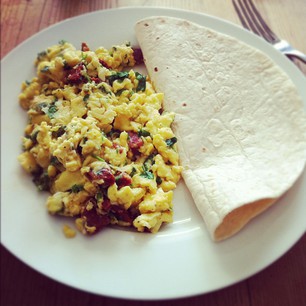 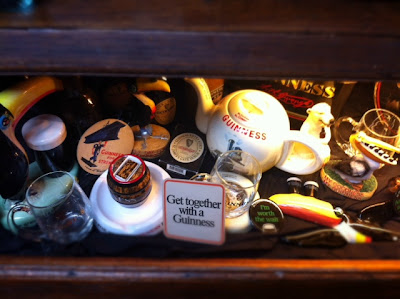 After weeks of talking about it and meaning to do it, I made a long overdue trip to Carlingford this weekend.  My father is from Carlingford, a small village in Louth close to the border, and it holds special memories for me. One of my favourite memories is of excitedly running down the street at least 3 times a day to visit the ‘shop’, just a normal shop but a magical experience for kids from the country who’s nearest shop is three miles away!  Carlingford is a gem of a town, it is quaint and still has a small town vibe – everyone knows each other and is very friendly, but surprisingly enough it’s also become a Mecca for hen and stag parties who come in their throngs every weekend.  I find this especially funny because, having been to the night club, now I use the term ‘night club’ very loosely here – It is the small, oh so small function room of the local hotel that transforms into the ‘club’ or aka an excuse to drink longer with loud music and a smoke machine!  But I know that not all hens and stags are about this (hens anyway) and Carlingford has loads of activities to keep the groups busy during the day, plus it really is a lovey friendly town so I can see the attraction.

I made the trip to visit my 95 year old grandmother Rose or ‘Nurse Toner’ as she is known locally.  She was the public health nurse and midwife in Carlingford for many years and delivered many of my father’s and his siblings contemporaries.  When I visit, Nana tells me stories of life back then which seems like a million miles away from life now.  Like the way they all used to cycle to the dances not a car in sight – Yeah I could imagine a group of Hens on bikes making their way to McKevitts now! 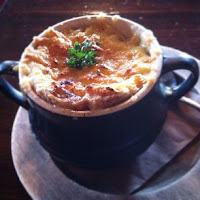 Now to the food, on the way to Carlingford, after you exit the M1 at Dundalk, you pass a pub on the left hand side not far after Ballymacscanlon house.  This pub is called Fitzpatrick’s and is renowned locally.  Surprisingly enough, I’ve never been there before, probably because we are usually anxious to make it to Carlingford before contemplating lunch; but this time it was planned and I was taking several recommendations on board.


The first thing that strikes you is that it’s incredibly kitsch, every inch of every surface is littered with vintage Guinness merchandise and various other bits of pub memorabilia.  Not to mention the ceiling, Ken had a great time trying to identify all the old tools and farm equipment that is nailed to the ceiling!  We were having an early lunch so decided on a soup each then we would share what was called a seafood tempura platter and chicken wings….light lunch ya know!   I had the French onion soup which was, I’m going to say it – a taste explosion in a bowl!  The broth was rich and beefy, the onions tender and the melted cheese a delight, really it was that good, I’m definitely going to attempt a version soon.  Ken had the seafood chowder which was creamy with decent chunks of seafood.  It also with an exquisite aftertaste that was rich and fishy in a good way!  The impressive platter came out and it was presented in a quirky style – the pieces of fish were speared with a fork and help upright in a block of wood.  The fish was fresh and the batter was light, I was a little disappointed by the lack of other types of seafood – I had expected some prawns, mussels and perhaps scallops but the seafood was all of the fish variety – salmon, mackerel and either hake or cod we weren’t sure.  The fish was accompanied by a wasabi mayonnaise that I loved but Ken felt was too overpowering and a simple salad.  The wings were also served in a unique way – wrapped in paper that’s meant to look like newspaper with the Fitzpatrick’s logo on it and inserted into a metal holder.  They were spicy-ish but a little unremarkable; I’d advise stick to the seafood if you’re planning a trip, they seem to do it better.  Lunch came to €38 with a 7up and a glass of Guinness but we did get a lot of food, a return trip is positively on the cards especially with the promise of the lovely town of Carlingford only up the road. 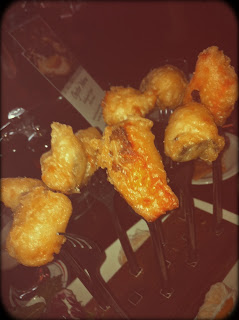