I've been meaning to write this post about Ina for ages but damn life keeps getting in the way.  With the local GAA dinner dance on Friday, far too much wine and then our family’s annual ‘Flanagan party’ also known as the piss up of the year on Saturday, I've been feeling a little under the weather shall we say.  The party was, as usual a fantastic success, my family for all accounts are affectionately known as a bunch of sneers, you wouldn't want to have a sensitive personality around this lot.  Consequently the highlight of the party was the initiation of the newest family members; girlfriends of my brother and cousins.  These poor girls were thrown like lambs to the slaughter into the pack of sneering wolves, Lots of banter and slagging ensued but thankfully the girls all survived their baptism of fire.  The food at the party was as usual faultless, my mother puts on a large buffet and it is all hand on deck on Saturday morning preparing the vast range of salads which seem to get bigger in number every year.  Then there are the desserts, ah the desserts; there is no point trying to dance around the fact, we are epic gluttons.  The desserts were a chocolate cake made by my fella, pear and almond tart, pavlova and trifle made by mother, the brother brought a key lime pie, the other brothers girlfriend brought a cake stand full of cupcakes and finally a lemon tart and a baileys cheesecake made by my lovely aunt Anne, I was not exaggerating when I said gluttons!!


Which in turn brings me to the charming Ina Garten, no I’m not calling her a glutton BUT her food is eh let’s just say not for the faint of heart or for that matter anyone with heart trouble.  For those of you who don’t know, and there are probably many of you who have better things to do than watch the Food Network obsessively; Ina Garten is also known as ‘The Barefoot Contessa’, she got this name because she bought a shop with the name already on it, not from walking around with no shoes on which would be a tad dangerous in the kitchen.  Ina’s cooking programme centres around entertaining for friends or her beloved husband Jeffery.  Jeffery features in the programme a lot and Ina has a tendency to maul him in front of the camera, maybe it’s because we are Irish we find that weird.  I was chatting to my auntie June about her at the weekend and June remarked that there was something creepy about Ina and her husband (see June there’s your mention!!) but I think it is the repressed Irish, we don’t like to see people showing affection to each other because we all have warped post-Catholic ideas about what’s right and proper and PDA’s make us wince with embarrassment, that’s my theory anyway! 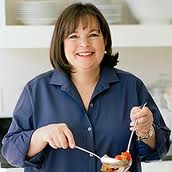 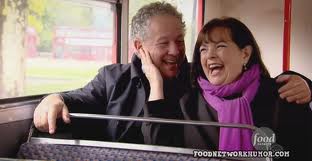 I think that Ina has another fetish anyway, a fetish all the more shameful and shocking…she just loves butter!! Seriously, she is renowned for it, every recipe begins with a stick of butter.  To make a nice healthy salad, you will need 1 stick of butter, 1 head of lettuce.. .you get the drift.  This is probably (no, definitely ) also the reason why all her food looks and tastes so good, I can vouch for this as I have 2 of her books and anything that I have made out of them are great especially the crostini’s which I have included a recipe for, they are delicious crispy little feckers!  When Jeffery is away, which is a lot of the time, Ina spends her time entertaining for her gay friends and drinking cocktails and playing cards – she has the life!   Check out the link from 30 Rock that I have attached where Liz Lemon wants to model her relationship on Ina and Jeffery’s.  Ina’s house in the Hamptons where the show is filmed is also amazing; ok I think I just want her life – who wouldn’t like that? (Another in-joke for you few Ina fans, she always ends everything with the words “who wouldn’t like that?” she even has a book with that title….God I’m sad…) 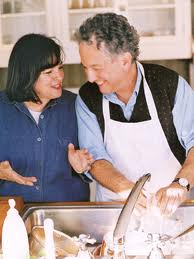