I was lucky enough to be chosen to avail of tweet seats at the new restaurant, Skinflint in Crane lane, Dublin.  For those of you not au fait with the notion of tweet seats, it is a digital market device whereby the twitter user must follow @SkinflintDUBLIN and then tweet the time and date they would like to dine.  Skinflint reply if you are successful with a private message and confirm your tweet seats.  This model was created by Skinflints successful sister restaurant CracKbird (which I have previously reviewed) and both restaurants are owned by the owner of Jo’Burger, the entrepreneur Joe Macken.  The location of Skinflint was also the first location for Crackbird when it was a pop-up restaurant.

My tweet seats were confirmed for 2.30 on a Friday, I was meeting up with a friend from college and said I’d give it a shot, lo and behold it worked.  I was as excited as a kid at Christmas; I never win anything!!  After being seated we were informed by our waitress of how tweetseats worked, we were entitled to a free pizza each and I had to tweet a picture of the meal. Perfect! Instant marketing for Skinflint and a free lunch for me. (Perhaps Skinflint didn’t know that I only have a measly 32 followers on twitter so word wasn’t going to spread that far but I kept schtum!)  The pizzas have ladies names like the ‘Tess’ and the ‘Sadie’ which I have learned are named after the staff member’s mothers (awh!).  I chose the Grainne which was sweet bacon, celeriac, tomato, mozzarella and pecorino, have been on a bit of a celeriac buzz since the Christmas soup so decided I’d like to know how it tasted on pizza.  Laura ordered the Vonie which had harissa, egg, Serrano ham and mozzarella.  We also ordered some delicious inhouse-made hummus and bread to start along with a glass of wine and a pink grapefruit lemonade for me (still on the wagon!!!! 20 Days, Longest time off booze in my adult life!).  The pizzas are grilled so I presume the bases are cooked then the toppings are added then it’s grilled again.  They come out on a massive bread board and are oblong shaped rather than round.  This is when Laura remarked that maybe the restaurant had a Moroccan/Turkish feel as that is how the North African cultures serve pizzas.  Also the coffees are served on little kitsch trays that reminded us both of an Arabic harem add this clue to the fact that Laura’s pizza came with Harissa a typical North African chili sauce; just call us Holmes and Watson! 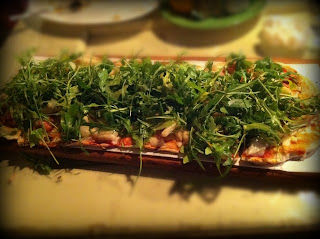 So to the food; the pizza was terrific and also huge, and I have a big appetite! You could easily get away with sharing one and then maybe get a side dish too.  Skinflint offers a ‘one pot wonder’ every day plus a choice of 3 ‘torpedo’ rolls, a meatballs option and a choice of Lasagna on a Sunday.  I ordered rocket on mine and I have to say it did come out looking like an overgrown garden.  There was far too much for my liking so I decanted half of mine over to Laura which suited us.  The celeriac worked well on the pizza, it was cooked till tender and complimented the sweet bacon to give a lovely mellow-tasting pizza – I’m not a fan of strong flavours on my pizza.  Laura’s harissa gave it an extra kick but she enjoyed it, the egg was mixed with the cheese and not just plonked on top as you can see on some pizzas.  Despite valiant efforts neither of us could finish our pizza and both left 2 slices which our waitress kindly wrapped up.  I also got a chicken breast torpedo roll to take away for a friend.  Including the roll, 2 drinks, the hummus and an espresso the bill came to €19 Euro which is great value.  Our pizzas were free but are normally priced from €8-€13; Skinflint lives up to its name, good food on the cheap, especially if you tweet!