Apologies for the delay in posting about the long anticipated rabbit pie!  Thursday evening started out typically, the brother arrived home with his pre-made pie filling and pastry.  He tried to roll out the pastry only to experience an epic fail; the pastry was so crumbly it wouldn’t even roll. We reckoned he hadn't put enough water in his pastry so he began again with a simple shortcrust recipe.  If you haven’t seen the Fabulous Baker Brothers on Channel 4, I would highly recommend that you do.  It is hearty, filling, boys food but with a gourmet edge.  One of the brothers is a butcher, the other a baker and every week part of the show is a ‘pie-off’ where they compete to make the tastiest pie.  My brothers are huge fans of the show, being foodies themselves so it was a joint effort with the pies.   I should say something about how the rabbits were actually sourced, not from an epicurean butcher in Ballsbridge, but from the fields of Kildare.  The brothers and their farmer friend went out lamping on Tuesday night and returned with 5 plump rabbits.  Murdering poor bunnies you say!!  A quick word about shooting rabbits; rabbits are classified as pests as they destroy crops and carry disease to livestock.I am in agreement with the practice of hunting rabbits.  Eating rabbit is no different from eating chicken or beef, just the methods used to procure them are more rustic.  As the Baker Brothers say if you are more of a “bunny hugger” you can use chicken in your pie. 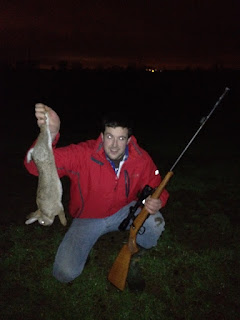 With the filling pre-made, we rolled out the 2nd attempt at pastry and filled the little beauties.  The filling is placed in the middle and you gather the pastry up and tie with string and stab with a final decorative sprig of rosemary.  Egg washed and baked for thirty the results were pretty impressive as were the appearance, if you compare ours to the ones on the website.  Unfortunately we were not able to savour the final result as we got one of those phone calls that you never want to receive.  Our father had been rushed to hospital with a suspected stroke.  Suffice to say we dashed to the hospital and the pies were left to go cold on the dinner table, I did have a bite but honestly cannot remember what it tasted like.  Thankfully this story ends well; it was in fact a transient ischemic attack (TIA) with no lasting damage.  We are incredibly lucky and thankful, Dad gets out on Wednesday and his and Mam’s pies remain in a Tupperware box in the freezer ready to be cooked on his return.

Recipe and picture for Rabbit Pie (from the Channel 4 Website) 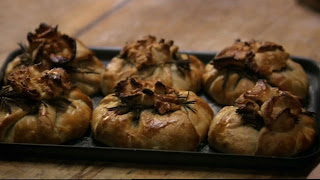 Method
In a food processor, blitz the flour and fat together to make the pastry. Add the iced water and knead until it just comes together. Wrap tightly in clingfilm and chill in the fridge for at least 30 minutes.

Fry the rabbit until sealed in a hot frying pan. Set to one side.

In another pan heat the oil and fry the onions and lardons until brown. Add the garlic, fresh thyme, and a knob of butter, then season with a good pinch of salt and pepper.

Add the wild mushrooms, carrot and potato. Then add the plain flour and stir for a minute or so. Put the rabbit back in then slowly add the chicken stock and sherry vinegar. Simmer for 1 hour until the rabbit is tender and the sauce is thick. Cool the mixture down then chill until cold.

Preheat the oven to 200°C/gas mark 6. Roll the pastry out into discs and spoon the rabbit mixture into the centre of each. Fold up the sides of the pastry discs and pinch the tops together to seal. Tie rosemary round the tops of each and secure with string. Brush with egg and bake for 35 mins till golden. 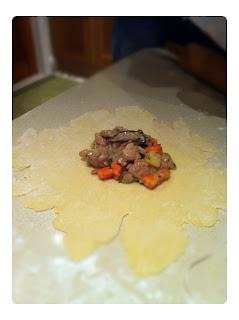 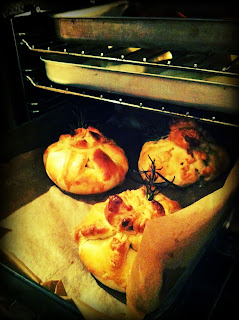 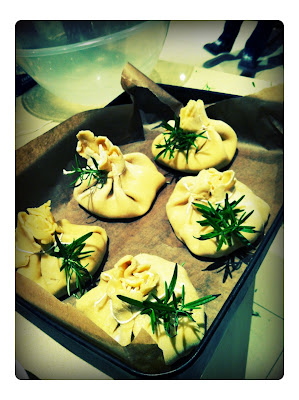